Small talk with little substance…”bears no fruit” with casual acquaintances, groups or strangers. 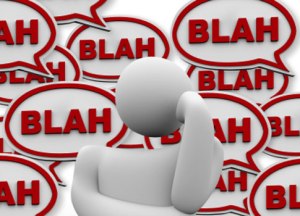 There was a study that someone conducted in regard to the attention span of the average listener.  It concluded after 25 seconds if the listeners had no interest in what you were saying… they tuned you out and were no longer listening.  (I am sure that I have made a lot of 25 second speeches without knowing it).  We sometimes initiate questions that promote longer answers (unintentionally) than we are prepared to listen to. For example: “How was your golf game today”? “Well on the first hole I knocked one out of bounds and three putted…then on the second hole”….and so on….get the point. The question that deserves a 25 second or less response… “What score did you shoot today”?

We all ask questions or make statements that are not meant to initiate a conversation…but as a means of politeness or awareness of one’s presence. Such as “How are you today?”… “Have a good day”… “Good golf shot”…etc…all of these can be responded to in no more than one or two words….and should be.

If you are trying to start a conversation that has value beyond 25 seconds…then ask a question to someone who has a source of knowledge to the question you are asking….and then be prepared to listen to the answer. Conversation should be an exchange of ideas or at least a learning experience.  Remember when you are talking “you are only learning what you already know”…and if your dialog extends beyond 25 seconds it should have interest to the other party.

There are some basic rules that we should all engage in such as:

…never ask a question that you know will embarrass or make the other person feel inadequate.

…questions concerning religion and politics are not good topics…if you know the other person’s views are different from your.

…having an opinion and elaborating on something that you know nothing about is more dangerous than not having an opinion at all. This one is a confirmation to the statement “I thought he was smart until he open his mouth and removed all doubt”.

…people usually would prefer talking about themselves or their own experiences with you listening …rather than listening to you talk about yourself.

Now I have just stated what I believe to be the proper protocol for starting an intelligent conversation with a casual acquaintance, group, or a stranger in the proper setting.

With that said… if you should run into an “old friend” that you haven’t seen in some time… in an informal setting such as on the golf course or like…none of the above applies…the proper greeting would be to extend you hand for a hand shake, smile and verbalize… “Damn you are as ugly as I remember”…It’s a guy thing…we wear it like a badge of honor….and it took less than 25 seconds.  Disclaimer: I would not necessarily recommend this greeting to the more intelligent gender…women.

DISCLAIMER: The information presented is either my opinion or information obtained from sources believed to be reliable and factual; however, I make no representation as to the completeness or accuracy thereof. Any errors, including misuse or misspelling of words is either due to my fingers hitting the wrong keys, oversight, or my own ignorance