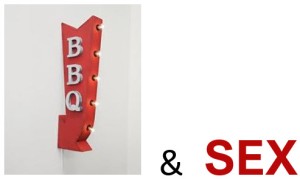 This article is written from the prospective of what I view as an average “guy” …especially if he grew up in the South.  I realize that it doesn’t fit all male thinkers…but I feel it does speak for a large majority. With that said…let’s talk about the mind-set of 2 three letter words in the English language that catches the 8 second attention span of the male brain…BBQ and SEX.

Imagine yourself driving down a freeway with your destination 3 hours away…and you see a sign that reads “BBQ…Next Exit”.  It doesn’t make any difference what the establishment looks like…if it is being served from the tailgate of a pick-up truck…it appeals to the male brain, and if your wife or female friend is not riding with you…you will probably stop and order…after all it is 3 hours before reaching your destination (male justification).  The wife on the other hand…is looking at the building establishment and wondering if the bathrooms are clean, do they provide several options on the menu, or if they even have a menu.? The male brain only saw and thought one thing… “BBQ” …no need to waste any more brain power beyond that point.

Okay…let’s look at the word SEX…and forget about driving down the freeway and your destination being 3 hours away.  On this subject you can create your own scenario…I think you get my point…if not…just focus on BBQ.

In conclusion…I am a firm believer in capitalism and creativity…therefore if you were going to create an establishment that would provide you with a return on investment based on capturing the 8 second attention of the male brain…it should be an establishment on the freeway with a large sign that reads… “BBQ & SEX…Next Exit”…one can only imagine.

Disclaimer: This was written as an attempt at creative humor…if it failed, so be it. The fact that you read this far means that the subject matter caught your attention…which proves my point.